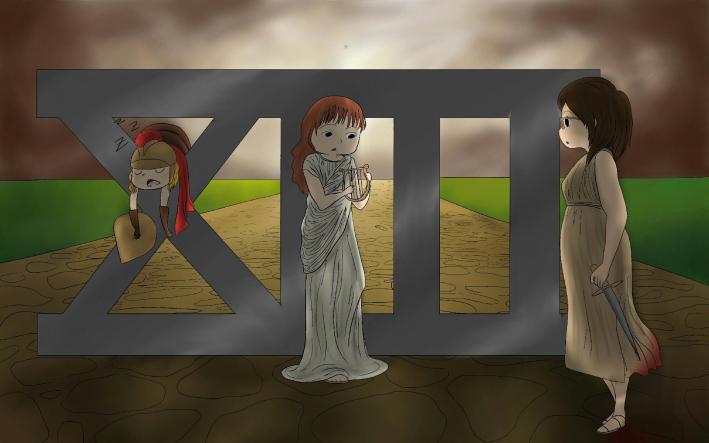 The Aventine has gone to hell. Everyone is robbing everyone and beating the shit out of everyone and Vorenus is sitting in his bed staring at Erastes decaying head and grieving Niobe and the kids while Titus and Eriene take care of him.

Marc Antony is getting ready for Cleopatra’s arrival, listening to Atia complain, dodging every single question Octavian asks about his inheritance from Caesar, and being forced to deal with the complaints of Roman citizens.

Cleopatra shows up and brilliantly throws shade by claiming that she doesn’t remember meeting Marc Antony. She’s there to negotiate Roman protection in exchange for grain and to insist that her son publically claimed as Caesar’s and Antony apparently tries to trade sex for the paternity claim and Cleopatra slaps him. As she’s leaving she recognizes Pullo (who’s likely the actual father of her son) in the crowd. 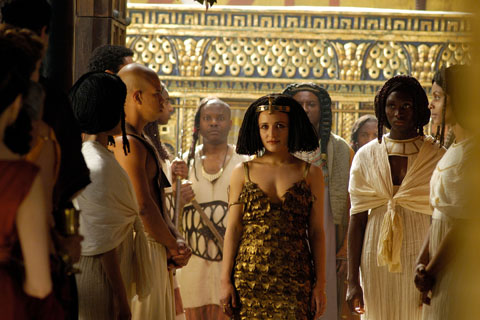 Pullo is waiting to speak with Antony about helping Vorenus, and Antony goes to Vorenus’ place to tell him to shape the fuck up. After berating Vorenus, Antony puts him in charge of getting the Aventine under control.

Atia has yet another party where she’s clearly planning to have Servillia killed, but Octavian thwarts those plans by threatening to tell Antony, so Atia has to cancel her plan. Cleopatra and entourage shows up, Cleo opening flirts with Antony in front of Atia, and Atia wants her dead – as usual.

Vorenus calls a meeting of the crime lords fucking up the Aventine and while they’re under some sort of truce under the patron goddess of thieving, murdering rapists, he smashes her statue and declares himself the Son of Hades and intimidates them all into behaving themselves. Pullo’s worried that Vorenus is going to piss off the gods, but Vorenus figures they’ve already done their worst by taking his wife and kids. This is a man who has zero fucks to give.

Octavian demands his share of the inheritance to appease common people and when he doesn’t get it, borrows money from a money lender and Atia and Antony lose their damn minds and Antony beats the shit out of Octavian.

Timon, Atia’s faithful servant, discovers that his zealot brother Levi has left Jerusalem to stay with Timon and his wife and children.

Later, Octavian leaves to stay with his friend Agrippa and leaves Atia a I’m-running-away-from-home note. On his way out of town, they pass slavers, and in one of the wagons are Vorenus’ children – miserable, but very much alive.

And now, the questions.

My favorite part of the episode:

I did rather enjoy Vorenus going off on the thugs. I enjoyed that a lot.

My least favorite part of the episode:

Seeing the kids in the slave wagon.

I can never find a decent picture of what I want, but I wish I was smaller chested so I could wear stuff like this in the summer. 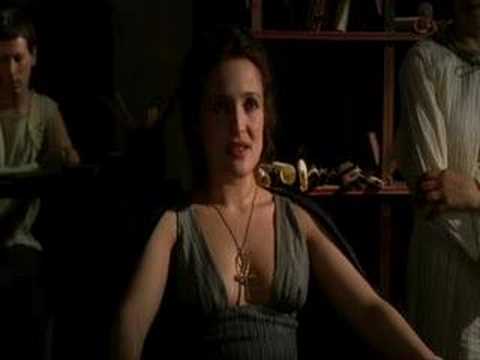 Team Atia or Team Servillia, and why:

Atia is still the literal worst at momming, but it was pretty ballsy of her to threaten a queen.

More of Pullo looking after Vorenus. I think she particularly enjoyed this bit. 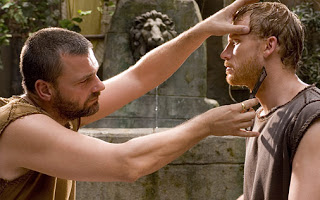 What made Jenny super happy?

Octavia coming into her own.

Jess’ take on Son of Hades.

Jen’s take on Son of Hades.

3 thoughts on “Rome S02E02: Son of Hades or The One Where Vorenus Finds Meaning in Life Running a Brothel and Intimidating Lesser Men”

I’ve been trying to find the right words for days, and I’ve come to the conclusion that I simply don’t have any. And that only adds to the miasma of helplessness, grief, and rage that I, along with so many others, have been submerged in. Lacking all the right words, I can only say this. I know that as a white woman, I can never truly understand what it’s like to be black or brown in America. I know that the privilege I have, based on nothing more than the color of my skin contributes to the oppression of black and brown people. I am sorry. I am so profoundly sorry, and I am committed to doing better. If you, like me, want to find a way to help but don’t know where to start, this article https://medium.com/equality-includes-you/what-white-people-can-do-for-racial-justice-f2d18b0e0234?fbclid=IwAR2sGQTPMZ7n-ZeQsBT1S8zc0TW-n3chjvSrTFVexD1dvu3qLhzEXY932cw has a long list of actions and a long list of BLM/anti-racism groups seeking donations, volunteers or help. Also, one of the graphics includes excellent suggestions for where to donate. And I’m including a couple more below suggested by my friend, @kathrynnolanromance 1. Maryhouse is one of the most powerful nonprofits I've ever had the privilege to work with during the 6+ years I worked alongside homeless men, women and children in Sacramento. They are providing life-changing survival services and in need of some items you can send easily via your Amazon Prime account. Click here if you want to send some love their way: https://amzn.to/2TQxFiA 2. Mighty Writers - my favorite nonprofit in all of Philly! They work with toddlers, children and teenagers across the city to provide powerful and vital writing programs. During the pandemic, they've switched to virtual programs and are also providing food boxes for their Mighty families, filled with diapers, books, lunches and writing worksheets. You can also follow their feed for daily inspiration if you want to see first-hand the power that writing can bring monthly to children. https://mightywriters.org/donate/ #blacklivesmatter #endracism #justiceforgeorgefloyd
The JUST RIGHT Release Party is going on all day today in The Lakehouse Party Room on FB! We’d love it if you dropped by. There will be all kinds of fun going on! I mean, look at this line-up!!! 😍😍😍😍😍 #romancebookstagram #romancebooks #romancenovels #paranormalromance #pnr #shifters #newrelease #bookstagram #bookparty #writersofinstagram #writerslife
JUST RIGHT is live and it’s in KU!!! 🖤🐾BLURB🐾🖤 Noah Makwa It’s bad enough that as the elder bear shifter in my clan, I’ve got to guide two adult cubs through their changes and help them acclimate to their newfound abilities, but the biologist who recently transferred to my office is the icing on my stress cake. She’s not only a beautiful distraction, she’s also smart, funny, and her research project has the potential to reveal the existence of shape shifters to the world—especially when there are two bears running around who aren’t quite acting as bear-like as they should. Gwendolyn Locke I moved to Parrish Falls—a.k.a. The Middle of Nowhere—Michigan to study black bears. But in the three months that I’ve been working as a biologist at the local branch of the DNR, I haven’t seen a single one. Because my boss has been actively C̶o̶c̶k̶bear-blocking me every chance he gets. I don’t know what his problem is, but I’m about to find out. Just as soon as I can look at his gorgeous, grumpy face and not mentally relive every filthy sex dream I’ve had about him. Confronting Noah doesn’t go as planned, and I discover that shape shifters exist and fairy tales aren’t just stories. Somehow, I’ve found myself snowbound and playing Goldilocks to three stupidly-hot bear shifters. As it turns out, “just right” is so much more than a figure of speech. #romancebookstagram #romancebooks #romancenovels #paranormalromance #pnr #shifters #newrelease #bookstagram #writersofinstagram #writerslife #freeinku #newbook #newromancebook
I finally got some black watercolor paper, and I swatched my metallic and duo tone paints on it tonight. It’s amazing how different the same color looks on black paper vs. white. #watercolor #paintswatches #watercolorpainting #watercolorart #writersofinstagram #writerslife
On Friday , the 29th, we’re having a party in the Lakehouse Party Room to celebrate the release of JUST RIGHT! You should totally come join us for the giveaways, games, and General silliness! #romancebookstagram #romancebooks #romancenovels #paranormalromance #pnr #shifters #newrelease #bookstagram #bookparty #writersofinstagram #writerslife
Today’s view—Lake Algonquin. #lazysunday #lakealgonquin #puremichigan #lakelife #writersofinstagram #writerslife