Okay, so it’s the start of the final season – season five. And it’s several years past the end of season four.

There’s a meeting of the Round Table, and for some reason, even though Merlin was an original member of the Round Table, he’s not allowed to sit at it anymore. I guess ’cause Arthur’s being a jerk. Gwaine and Percival and some other knights were on a quest and they’ve vanished – mostly because it seems like they wandered onto the Game of Thrones set. 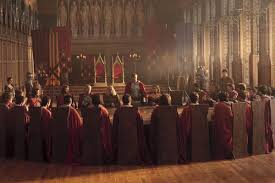 But no – they were attacked my Morgana’s men, kidnapped and forced to work in the mines to find the Diamir. The Diamir is the Key to all Knowledge and will be Arthur’s Bane – as we hear endlessly throughout the two episodes. The upside here is that there’s some serious fan service for people like me. This translates into another episode of shirtless Gwaine. Judge me all you want.

Morgana is crazypants and short sighted as usual, but now she’s hooked up with a druid who’s hell bent on destroying Arthur and Camelot. You know…like nearly everyone else in Britain. Druid dude’s daughter somehow worked her way up the ranks to become Gwen’s personal servant. And she’s of course spying for Daddy Dearest. 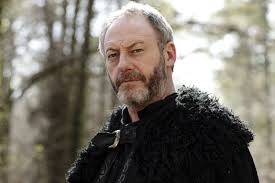 She gets info to her father about the route Arthur is taking to rescue his men. On the way there, they find a bunch of dead villagers and one that was only mostly dead warns Merlin about Arthur’s doom and Merlin sees a vision that shows Mordred (all grown up) killing Arthur in battle. After they bury the dead, they continue traveling by way of Queen Annis’ lands which is lovely, because I adore her. So there’s a visit there and after a rest, they head out only to be attacked by Morgana’s men. I don’t understand how people keep aligning themselves with her. She’s a lousy tactician.

Leon and Elyan escape and a bunch of the knights get dragged to Morgana’s mines to continue the search for the Diamir (even though no one knows what it is) and Arthur and Merlin get away. They spend the night cuddled, or you know huddled together, and Merlin tries to convince Arthur to abandon the search and Arthur isn’t having and tells Merlin that he’ll rescue them or die trying. Merlin says that he’ll die protecting Arthur. And they have a tender moment.

These tender feelings last until Merlin gets them both trapped in a snare. Arthur is furious and them Merlin manages to drop Arthurs sword and Morgana’s men find them in the morning and lo and behold Mordred is with them. They get carted off with the other slaves, though Mordred does use his influence to spare their lives at least until they get to Morgana’s place. 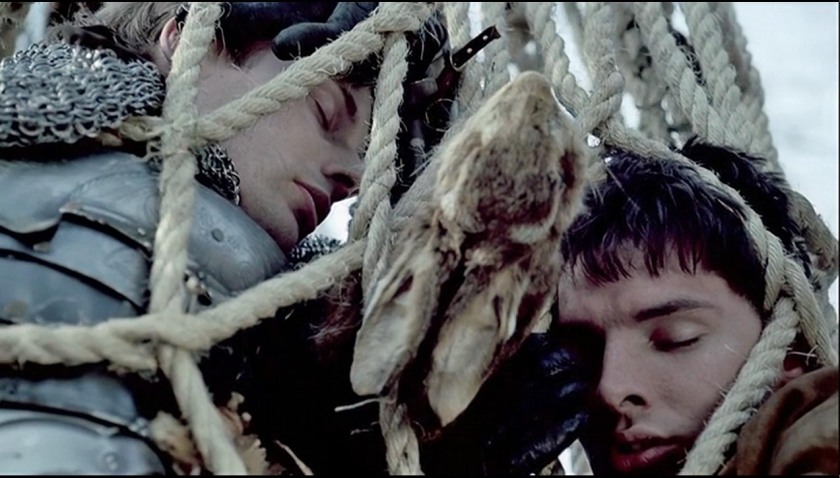 We find out through Morgana’s bad dreams that she was held prisoner in a well with Aithusa (remember the dragon) for two years. Not sure why or who or captured them, but there it is. However Aithusa is safely in the castle with Morgana now. 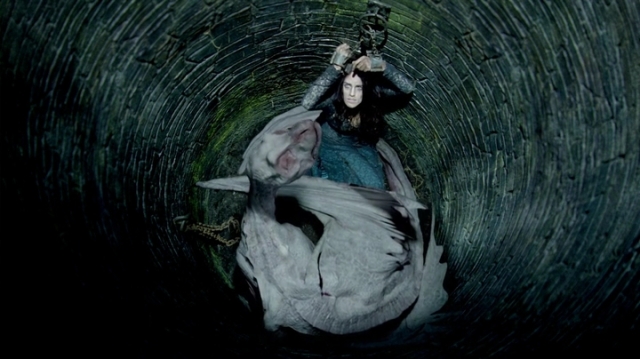 Meanwhile Leon and Elyan return to Camelot, tell Gwen what’s up, Gwen figures out that her serving girl is the spy and has her sentenced to death hoping to draw out the girl’s father. It works, he tries to rescue her and ends up mortally wounded.

Back in the mines, Gwaine sees something – a bad CGI glowy alien kinda something and follows it deeper into a cavern. Some guards spot him and kick the shit out of him. And after they leave the creepy CGI glowy alien dude heals Gwaine.

Arthur and Merlin escape from the slavers and Merlin is pissed because Arthur won’t shoot Mordred when he comes after them. But they sneak into Morgana’s stronghold and into the mine where they round up the knights and start an uprising. Merlin and Arthur find Gwaine and the Diamir. Gwaine convinces them it’s a friend and they leave the Diamir and try to find the rest of the knights. 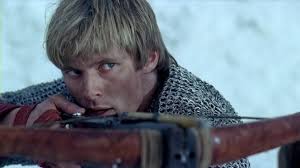 Merlin stays behind to distract the dragon so Arthur can get Gwaine to Percival while Merlin’s trying to get control of Aithusa who Morgana’s unleashed in the mine. Morgana traps Arthur and toys with him instead of just straight up killing him. Mordred is at her side weighing his options.

Merlin finds Aithusa, commands her to stop torching people. Aithusa wants to be by Merlin, but can’t communicate with him. And I hate this scene because Aithusa is that poor puppy that follows people and the people yell and tell it to go home. It’s the worst. And I get that Merlin can’t very well bring a dragon back to Camelot with him, but damn. Call Killgareh – do something. But no. Let’s just abandon this dragon to Morgana.

Speaking of Morgana, she’s still taunting Arthur with his imminent death when Merlin races back to save him. She throws Merlin against the rock walls and knocks him out and just as she’s about to finally kill Arthur, Mordred stabs her in the back.

Mordred leads Arthur out and the Diamir heals Merlin and Merlin asks what Arthur’s Bane is. Spiler alert: it’s himself. He’s his own biggest enemy. Like all of us, really. 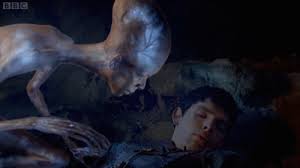 Back at Camelot, Arthur knights Mordred, Merlin continues to remain suspicious of Mordred, Gaius pooh-poohs Merlins concerns, and Morgana stumbles into the wilderness to continue to plot Arthur’s death. Like usual.

1.)  If I’d written this episode… I don’t think I would have made the Diamir look like a vaguely humanoid jellyfish. Actually, I’m not sure I would have included it in the plot at all. Okay, fine – give Morgana a different excuse to force Gwaine into hard labor. It could have been anything, but a supernatural creature that’s the last of it’s kind and hiding down there for centuries or however long, seems like maybe they had some money left in their CGI budget and were looking for an excuse to use it. Or, perhaps more likely, someone’s kid was interning on the show and dabbled with computer animation.

2.) The thing I loved/hated most about this episode. Okay, look. I’d like to think that I don’t even have to answer this question, but here, I will. Eoin Macken doing manual labor in the mines. I don’t care how shallow and terrible that makes me. I’m just gonna own that shit. I really hated sad puppy Aithusa. That was awful. I also hate that Morgana has been reduced to a giant pile of crazypants.

3.) Something you never noticed about this episode before. That some of Camelot’s guard are pretty casual about standing at attention. Also, in keeping with the fruit theme of life at Camelot, Morgana has fruit. But only apples that she can peel aggressively. No grapes for for her. Or pears. Just apples.

4.) Favorite costume. I bet you thought I was just gonna post another shirtless pic of Gwaine, huh? Okay, I totally am. But I’m also fond of the druid girl’s dress. So there.

5.) Here is some proof of some random head canon I’ve created. Nothing this week. Other than Morgana would have probably been in a better mood had she and Gwaine gotten some of that sexual tension out of their systems.

6.) What Merthur moment did Jess have the naughtiest thoughts about? Definitely Merlin and Arthur cwtching up together for warm and Merlin vowing to lay down his life for Arthur. Also…there’s this. 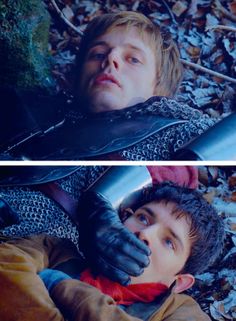 7.) What made Jen lose her shit  – in a good or bad way? The weird, unnecessary, jellyfish alien of knowledge.

Here’s Jess‘ take on the episode,  and here’s Jen’s

3 thoughts on “Merlin Club: Arthur’s Bane (parts 1 & 2) or The One Where I Think Having Gwaine Do Manual Labor While Shirtless is an Acceptable Plot Device. Also, There’s a Bad CGI Alien.”