This is likely going to be a super short recap this week because I’m utterly swamped.

Despite the fact that the Old Religion is banned in Camelot, they’re having a Beltane feast anyway because nothing says Camelot Abhors Paganism like a good old fashioned celebration of everyone’s favorite fertility rite.

During the feast, Greasy Agravaine lets Morgana and Band of Merry Mercenaries into the lower town and they torch it. And we learn that Agravaine is a cool guy who doesn’t look at explosions.

Camelot is overrun, Arthur is wounded, and it’s only a matter of time until Morgana’s men find him. Arthur refuses to leave his people, and Gaius, who’s treating the wounded is all out of his super effective roofie potions, so Merlin discreetly magics Arthur unconscious and he and Leon and Percival escape with Arthur. Gwaine stays behind to protect Gaius and to give Merlin enough time to get Arthur out of the castle. Arthur, Merlin, and Percival meet up with Elyan in the in woods outside Camelot where they’re pursued by Morgana’s men. Merlin and Arthur get separated and Elyan gets captured and tortured by Morgana because she gets off on it.

Merlin discovers that, as a side effect of his spell, Arthur is incredibly docile. And a little…slow. Okay, he’s more like a halfwit. Merlin insists that Arthur change out of his king clothes and wear some peasant-y clothes. They’re ill-fitting – no…really ill-fitting. And they also meet and take refuge with a couple secondary characters – Tristan and Isolde – smugglers who hate the King of Camelot. Don’t get me started on their names…

They’re set upon by Morgana’s Band of Merry Mercenaries and flee to Eialdor – Merlin’s homevillage. There, Arthur’s and Islode’s wounds are tended and Arthur discovers that Gwen is living in Eialdor. They’re attacked again by the mercenary army, led by Agravaine and Arthur finally realizes that Merlin was right all along and Greasy Agravaine is a piece of shit.

As they’re fleeing, Merlin calls the dragon who destroys the majority of the mercenary army while Merlin leads Arthur, Gwen, Tristan and Isolde through a series of caves. He doubles back to call the dragon and have him check for the survivors and come up with a plan to restore Arthurs flagging confidence.

After the dragon leaves Merlin is set upon by Agravaine. They have a little chat and Agravaine figures out Merlin has magic and has all along and Merlin magically throws him into the cave wall a couple times and kills the bastard in the least satisfying way possible. But whatevs. He’s dead, I guess. And now, I don’t have to listen to his shit anymore.  It’s something. I’ll take it.

Back at Camelot, Morgana’s been torturing Gaius, Elyan and Gwaine for information on Arthur’s whereabouts, and making Gwaine fight (shirtless, of course) for food to feed Gaius. Honestly, the writers should have done us all a favor and had some straight up hate sex between Gwaine and Morgana. But no.  Just fighting for bits of some sort of quiche in a bread bowl thing that looks like it came from Panera. 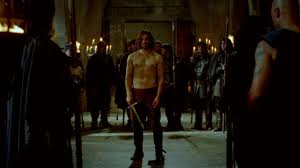 Back in the forest, Merlin, having snuck out previously to round up the remaining villagers per the dragon’s villager locating program, leads Arthur to where Excalibur is stuck in the stone while telling him a story about he who pulls the sword from the stone is meant to be king blah blah blah. But he talks Arthur into trying it. And uses his magic to discreetly help Arthur remove the sword. Tristan and Isolde finally decide that the new king is okay with them after all and they join Arthur’s cause.

At some point, Merlin has put on his magical Dragoon/Emrys aging spell and crept back into the castle to put some kid of spell poppet under Morgana’s bed.  Then it’s time to take Camelot back. They storm the castle, remaining knights and peasants alike – and also King, servant and King’s former fiancee – everyone’s in on ousting Morgana. Percival frees Gwain, Elyan and Gaius. Everyone else fights their way through the rest of Morgana’s Band of Merry Mercenaries to find Morgana in the throne room. Morgana tries to use her magic on them, but it fails miserably (thanks to the poppet under the bed) and she runs while everyone else fights.

They eventually win, Isolde gets mortally wounded saving Arthur’s life and Gwen runs into Morgana and they fight, but Merlin eventually saves Gwen’s life because god forbid a woman in this show fucking save herself.

Arthur and Gwen make up (and marry off screen) and the season ends with Gwen’s coronation and Morgana unconscious and alone in the forest and the arrival of Aithusa who breathes dragon breath on her and revives her.

1.)  If I’d written this episode… I would not have named Tristan and Isolde Tristan and Isolde. This was a lame ass attempt to work in more characters from Celtic mythos and it’s a lame as fuck attempt. Also, don’t introduce characters that you want us to care about two episodes before the end of the season. I know they were meant to be a parallel to Arthur and Gwen, to help motivate Arthur to forgive Gwen. But just NO. If they were going to introduce these characters for this purpose, they should have had them be recurring characters through out the season instead of this last minute bullshit.

2.) The thing I loved/hated most about this episode. I adored Village Idiot Arthur. I loved that Greasy Agravaine is finally fucking dead. I loved the beginning – Merlin was putting another hole in Arthur’s belt claiming it was one hole shy of perfection and Arthur accuses him of calling him fat while he’s standing there with no pants on.

3.) Something you never noticed about this episode before. All the damn fruit in Arthur’s chambers when he’s getting ready to go to a damn feast. Why do you have all those grapes, Arthur!? Maybe there’s a reason your belt is one hole shy of perfection.

4.) Favorite costume. Pretty sure Gwaine’s abs can be considered a costume.

5.) Here is some proof of some random head canon I’ve created. Nothing this week.

6.) What Merthur moment did Jess have the naughtiest thoughts about? Please note the lack of pants. I feel certain that Jess’ version of this scene ended somewhat differently. Of course, there’s also the heart to heart Merlin had with Arthur by the fire when he was the Village Idiot. And the fact that Merlin was being a bit bossy and Arthur falling in line like a good sub. Yeah. I bet that was it. But I’m leaving pantless Arthur up here anyway.

7.) What made Jen lose her shit  – in a good or bad way? Oh, in a bad way – the inclusion of Tristan and Isolde as secondary side characters and the fact that Aithusia is just wandering the damn woods and falling in with evil sorceresses. Shouldn’t the be someone looking after that damn dragon?

Here’s Jess‘ take on the episode,  and here’s Jen’s

2 thoughts on “Merlin Club: The Sword in the Stone (parts 1 & 2) or The One Where Agravaine FINALLY Dies – Though Not Satisfyingly At All”