I know, I know. It’s been way too long without an episode of Riding in Cars with Boys. Lately, it’s been 90% video game talk and well…I’ll admit most of it is unintelligible to me seeing as how I speak very little Area of Effect, Hit Points and Critical Damage.

Right before I left for school to pick up the boys, I got these texts from Killian. 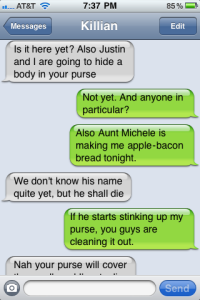 Half an hour later, I pulled into the school parking lot and the boys piled into to the car along with a new blond kid I’d never seen before.

Justin: Good. I see you’ve brought the Bag of Holding. We’ll be needing that for body hiding.

Me: (Peering at the poufy haired blond in my backseat) So…introductions?

Justin: This is Zach. He lives kinda by me and I told him you wouldn’t mind bringing him home. Is that cool?

Justin: This is Mrs. Killian’s Mommy, the coolest mother you will ever meet. Ever.

Not Kevin: That can be arranged.

Zach: Nice to meet you. (Turns to Justin) Dude…did you just throw your own mom under a bus.

Justin: Yes. Because my mom is batshit crazy. And so is she, but in a totally good way. You’ll see.

Me: And that’s why I’m adopting you. Okay, so back to the whole body hiding thing. I assume this involves a girl?

Killian: But of course.

Justin: Her name is Meg.

Me: Is she from The Island?

Justin: I’m pretty sure she is. I talk to her every day in math. She likes the same books I like and she thinks Katniss (the heroine of The Hunger Games) is a whiny, selfish bitch, too.

Killian: She has a boyfriend. That’s why we need your purse.

(In case you’re wondering – this is the purse in question. Sure, I could probably fit a small child in there, but a teenage boy is pushing it.)

Justin: Your kid is right. It’s the only way.

Me: Murder is the only way to get a girlfriend?

Justin: Look, I don’t know who your kid killed to get a girlfriend as great as the one he has, but it must have been someone.

Me: Maybe he’s just awesome and she sees that about him.

Justin: Or he drugged her. Did you drug her?

Killian: No, I didn’t drug her.

Justin: Whatever. I don’t believe you. I just know that this guy has to go, then I can move in with the comfort and sympathy.

Me: I’m pretty sure that’s not how it works, guys.

Killian: Well if you’re not gonna help us, maybe Siri will. 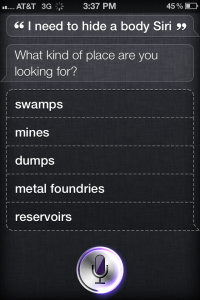 Me: Of course, Siri offers help for hiding a body. Not helping, Siri! And you guys wonder why I fear Skynet.

Sadly, (for Justin, anyway) Meg’s boyfriend hasn’t found his way into my purse or any of the other places Siri suggested.

19 thoughts on “Riding in Cars with Boys – Part Fifteen”